The tclcsv extension for Tcl provides a fast and flexible means of reading and writing text files in Comma Separated Value (CSV) format.

Prebuilt 32- and 64-bit binaries for Windows are available from http://sourceforge.net/projects/tclcsv/files/. Unzip the distribution into a directory that is included in your Tcl auto_path.

For *ix systems, a TEA-compliant source distribution can be downloaded from from the same location. To install, unpack the distribution and in the toplevel directory type

where PATH_TO_TCLCONFIG is the full path to the directory containing the tclConfig.sh file for your Tcl installation.

To use the extension, load it with package require:

The package provides two ways to read CSV data from a channel:

Both forms take various options that indicate the specific CSV dialect as well as options that limit which rows of the data are returned.

The csv_write command takes a list of records, each of which is itself a list of fields, and writes it as CSV-formatted data to a specified channel. As for the csv_read command, the format can be controlled with options that specify the dialect.

The exact form of CSV data can vary. CSV ''dialects'' may differ in terms of delimiter character, the use of quotes, treatment of leading whitespace, header lines and so on. The dialect command returns appropriate values for options to be passed to the csv_read and reader commands to handle well-known dialects such as Excel.

In addition, the tclcsv package provides convenience commands that are primarily intended for interactive use when the dialect used for the CSV data is not known.

As an aid for both the programmer as well as the end-user to correctly select the various options for a dialect when the exact dialect for a file is not known, the package also provides the dialectpicker Tk widget. The widget allows the user to set various parameters, such as file encoding, delimiter etc. simultaneously previewing the first few lines. These settings can be programmatically retrieved and passed to one of the CSV read commands to correctly parse the data.

All commands are located in the tclcsv namespace.

The command reads data from the specified channel (which must not be non-blocking) and returns a Tcl list each element of which is a list corresponding to one row in the read CSV data. The caller should have appropriately positioned the channel read pointer and configured its encoding before calling this command.

The command will normally read all data from the channel until EOF is encountered and return the corresponding rows. The following options modify this behaviour:

The following options collectively specify the dialect of the CSV data.

The command writes ROWS to the specified channel CHANNEL. ROWS must be a list each of whose elements is a sublist corresponding to a single record. The caller should have appropriately positioned the channel write pointer and configured its encoding before calling this command.

The CSV dialect used for writing is controlled through the options in the table below.

Returns the appropriate values for options for the CSV dialect NAME. Currently, NAME must be excel or excel-tab which correspond to the CSV formats supported by Excel. The former uses commas and the latter tabs.

This command takes one of the two forms shown below.

Each form creates a command object that will incrementally parse CSV data from the specified channel (which must not be non-blocking). The caller should have appropriately positioned the channel read pointer and configured its encoding before calling this command.

The reader create command allows the caller to specify the name of this command object whereas reader new will generate a new unique name. Both return the name of the created command.

Options are as detailed for the csv_read command with the exception of the -nrows option which is not relevant for this interface.

The methods supported by the reader command objects are detailed below.

Destroys the READER command object. Note that closing the attached channel is the caller’s responsibility.

Returns 1 if there are no more rows and 0 otherwise.

When no more rows are available, the method returns an empty list. This is not distinguishable from an empty line in the CSV input if the -skipblanklines option was specified as false. The eof method may be used to distinguish the two cases.

The following is an example of parsing using reader objects.

Attempts to guess the format of the data in the channel and returns a list of appropriate options to be passed to csv_read ?OPTIONS? CHANNEL. The command uses heuristics that may not work for all files and as such is intended for interactive use.

If the data includes a header, the command returns a list with two elements, the first of which is a list containing the deduced type of each column, and the second element being a list containing the header fields for each column. If the command deduces that the data does not contain a header, the returned list does not contain the second element.

The deduced type of each column is one of integer, real or string. Note that integer type check is done as a decimal string and thus hexadecimal values are treated as strings and values like 08 (invalid octal) are accepted as valid integer values.

The command uses heuristics that may not work for all files and as such is intended for interactive use.

The following examples show the return values with or without a header being present.

Note that when a header is present, you can use the -skiplines option to csv_read to skip the header.

The dialectpicker widget allows interactive configuration of the dialect settings for parsing CSV data from the specified file or channel. The widget presents controls for the various settings and permits the user to modify them and inspect the results of parsing the CSV data from the channel using the configured settings.

WIDGET should be the Tk window path for the widget. This is also the return value of the command.

DATASOURCE should be either the path to a file or the name of the channel from which the CSV data is to be read. In the case of a channel, the configuration, including the seek position and encoding, of the channel is restored to its original when the widget is destroyed.

In addition to Tk, the widget requires the snit package, available as part of tcllib, to be installed.

An example invocation is shown below. 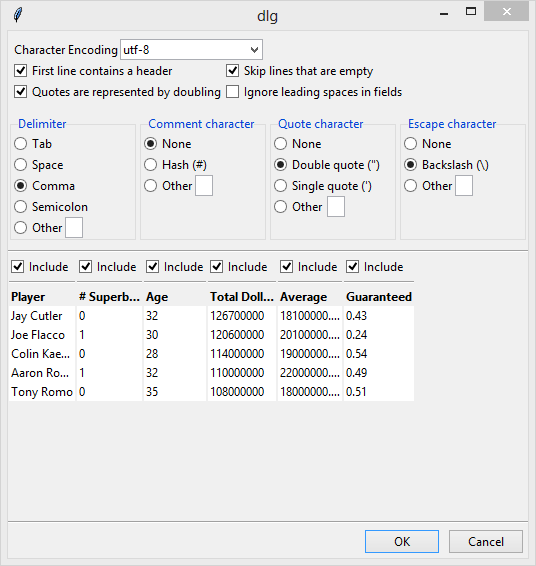 The top half of the widget contains the various settings related to parsing of CSV data. The bottom half displays a preview table which is updated as these settings are modified by the user.

On creation, the widget sets the initial values by sniffing the channel. These can be overridden by specifying options to dialectpicker when the widget is created. These options are

The current settings for the widget can be retrieved through two method calls encoding and dialect.

Returns the character encoding name currently selected in the widget.

Returns a dictionary of CSV dialect options with values as set in the widget. The dictionary contains all the options shown in dialectpicker options. If the user has deselected any of the Included checkboxes for any column in the preview pane, the dictionary also includes an -includedfields option specifying the subset of fields to be read from the data. If the Header is present checkbox is selected, the dictionary includes a -startline 1 option indicating the first line should be skipped when reading data.

The return value can directly be passed to the csv_read and reader commands as options.

The source code for the extensions is available from its project page at http://sourceforge.net/projects/tclcsv/.

Please report any bugs at http://sourceforge.net/p/tclcsv/tickets/.

See the file license.terms in the distribution or in the src directory in the source repository.

The core of the CSV parsing code is adapted from the CSV parser implemented by the Python pandas library.

The hashing code is from attractivechaos.